It's called "Natural Selection" – and it's weeded out some the most deserving examples of imperfection this planet has ever seen.

Natural Selection has claimed the likes of Neanderthal, the Dodo and Space Shuttle Challenger, and now, like a heavenly shield protecting everything decent and right with America's roadways, it's cast its unmerciful shadow over the pathetic lives of countless brain-dead SUV owners. It is the natural order of things. It is God's will.

"JUSTICE, thy name is Firestone."

With all the media flap over the zillions in lawsuits now being leveled at Bridgestone (Firestone's Japanese parent company) and Ford (amongst others) concerning the tire blow-out fiasco, I have only seen a single instance of anyone appearing on television to set the record straight. To put it mildly, it was about goddamned time.

Back in September, Brock Yates, Editor at Large for Car and Driver magazine, spoke with Neil Cavuto of FOX News and just plain B L E W people's minds with what he had to say about the sordid truth behind the blown tires. It was something that all car guys (and about fifteen women) knew from the beginning. It's something we'd get beat down for having the balls to bring up in polite company, so most of us car guys keep their mouths shut.

…but not the Thirteenth Apostle.

It happened like this: God had seen that American intellect had become so downsized by our flaccid public educational system and equally incompetent, car-hating liberal media, and that He knew it to be bad. Many poor souls had simply become too stupid to breed. To address this earthly dilemma, The Almighty, in His infinite and perfect wisdom, sent celestial emissaries in the guise of lowest bidder, crappily constructed, base model Firestones.

And God saw that it was good.

The Flood has returned-and it's raining shredded rubber and thundering the screams of soccer moms as scores of their never-seen-off-road sport-utes careen off of the highways and byways of our bountifully blessed country.

What Yates had to say - and what I'll elaborate on here - is that people don't know their air-bag-protected ass from their cell-phone-strained tennis elbow about proper vehicle maintenance… or basic survival skill driving. Yes, these tires are complete shit. That's why you never see a "real" car guy's off-road vehicle saddled with the "base model comfy-ride" donuts it rolled off the fucking assembly line with.

And I am not suggesting making your ride "taller" by putting a giant set of "Gumbo-Mud-Monster-Motherfucker" skins on it, either. Remember this bumper sticker? "The distance between the axle centerline and door sill is inversely proportional to the length of the operator's penis. In other words: The taller your truck, the shorter your dick." —  R. Humphries, 1979.

We (real car guys) don't buy SUV's, because we don't want nor need a too tall station wagon to serve as a penis/breast-enhancing status symbol. But, since other people - stupid, narcissistic nematodes from the scummed-over surface of the gene pond - do buy them, we're supposed to believe the world is falling apart just because these asswipes are dying in record numbers.

Please. Why should we lose any sleep over them posthumously contributing the latest recipe to the road-kill cookbook?

If the vast majority of American drivers don't know not to stab the fucking brakes thereby flipping over their silly-ass, incorrect-tire-pressure, way-too-top-fucking-heavy SUV's in an untrained panic, Natural Selection has a way of catching up to them.

Be happy. It's proof there is a God. 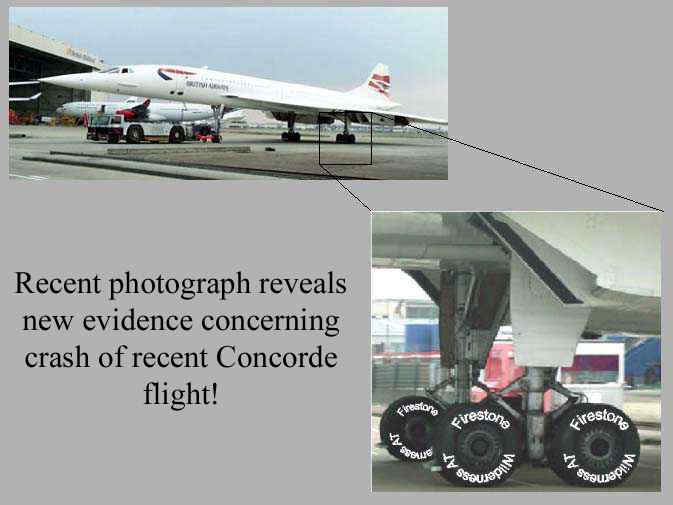 Unfortunately, because insurance industry marketing has told them how "invincible" they are in their Explorers (or their Expeditions, their Excursions, their Escapes, their Excrements...), these cranially challenged cretins always drive like they're in some sort of Hollywood special effect rather than strapped to honest-to-goodness speeding metal governed by the laws of physics.

For these "un"roadworthy subspecies who probably rode to public school on the short bus, any nail will eventually prove the last nail. And the sooner the better.

We shouldn't be bashing Firestone and Ford. Instead, we should ask the Pope to canonize their CEO's for sweeping out the shallow end of the gene pool.