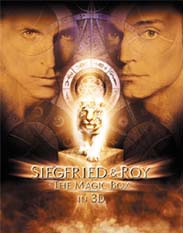 Our film opens with two young boys sneaking behind a stage curtain. Two effeminate middle-aged men dressed like refugees from the renaissance festival ballet troupe confront them. They invite the boys to explore their "magic box."

Is this vividly three-dimensional nightmare the opening scene in a NAMBLA recruitment video? A publicity shoot for Gay Pride Day at Disney World? A Wednesday afternoon photo-op on Castro Street in San Francisco? No. It's the opening shot from Siegfried and Roy's new IMAX film, The Magic Box.

The bombastic promo tag says it all:

Okay, so that last line isn't in the promotional material, but it oughta be. Roy seems to have as much affection for his bulging leather codpieces as he does for Siegfried's cod. This normally wouldn't be worth mentioning, but when someone's crotch is being displayed on an 80' by 60' IMAX screen - in 3-D, no less! - it's hard not to bring it up in casual dinner conversation.

Be afraid. Be very afraid.

Aside from the incredibly creepy opening scene showing the "magically" seductive capture of two prepubescent boys by a pair of potentially pedophilic prestidigitators, there's enough double entendre in this 50-minute homoerotic epic to make Freud rethink that "sometimes a cigar is just a cigar" line. Hell, this celluloid gem could make Clinton put his cigar back in the patented Monica Humidor on live television.

Frankly, though, the gay overtones of this film can't begin to hold a candle to the subliminal Nazi propaganda that permeates the storyline.

This is the life story of Siegfried Fischbacher and Roy Uwe Ludwig Horn (the name "Siegfried" being German for "Butch" while I believe "Roy" in German means "Prances With Wolves"), but they're both being German is not where the Nazi connection stems from. Honest.

Through a 3-D digital dreamscape of youthful flashbacks to S & R's early days - something akin to a cinematic circle jerk combining visual cues from The Wall, The NeverEnding Story and The Adventures of Baron Munchausen - we see where S & R's "world view" went horribly, horribly wrong.

And what do we learn from Sir Anthony "Nice Chianti" Hopkins' deadpan narrative?

Well… Roy just looooooooooooves critters - as long as they're white. It seems that, as a child, poor Roy nearly drown in some of the quicksand for which Germany (???) is so famous. And how'd he get in this spot in the first place? An evil BLACK raven lured him into the queerly placed quagmire in order to drown Roy's lily-white Aryan ass. The die was cast: Never trust a black anything… 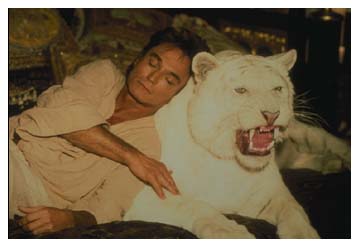 Meanwhile, Uberkinder Siegfried is trying to snap his dad out of a wartime-induced trance with a bit of prop magic. You see, after losing the war, Siggy's pop just sat staring into the fireplace for days on end as though hypnotized. Siegfried, Jr. wonders what poppa saw in the fire. I think we all know what he saw in that fire…

Anyway, by the time lounge-show-whore "Siegfried the Steward" and cheetah-smuggling "Cabin Boy Roy" meet on an ocean liner bound for America (this is a biography, folks!), their evil plans for world domination via an ultra-extravagant "now you see it - now you don't" magic act and miscellaneous faggish mayhem were forged in steel… and presumably sealed with a kiss.

And now, through the magic of your local IMAX Theater, you don't have to travel to Vegas to become entranced with their vision of a whiter Africa! I'm not kidding about this, either. Roy's multi-million dollar "Secret Garden" (German for "Big Gay Al's Animal Shelter") is a refined breeding operation for WHITE lions and tigers to be introduced in darkest Africa where they can "reestablish their numbers" (yeah, I know tigers are from India, but…) — You can do the Fourth Reich mammal math.

Congratulations! For reading this far enjoy this fine girly ass...

I don't mean to spoil the ending, but the film closes with those two sweet little boys from the first shot being enveloped by the mysterious cloaks of Herr Roy und Herr Siegfried. That's more than a little disturbing to me, but I'm pretty sure that if Penn & Teller would have had sense enough to look up how "Magic Box" literally translated, they would have rushed to perform an emergency intervention at the Boy Scouts of America convention being held over at the Mirage.

"Who are these people... Friends of yours, huh? Now, this really pisses me off to no end!"
— James Hong in Big Trouble In Little China