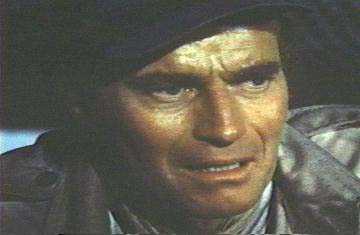 I never thought I'd be uttering those words in a public space. Of course, I never expected to be surrounded by this many dumb-asses in my life, either.

That plaintive line, spoken by a dying Charlton Heston in the 1973 flick of the same name, was never intended as a political statement other than your basic, "Government: Bad/People: Good" sentiment shared by so many in that turbulent era. Of course, since November 7, 2000, I think we could readily amend the aforementioned political statement to, "Government: Bad… Because people who are too goddamned stupid to tie their own shoes allow it to get that way."

Before I continue, you need to understand that "The Thirteenth Apostle" makes it a point not to reveal his secret identity when he's allowed out in public. Really. I don't like to cause trouble. I am anything but a celebrity, and I make a conscious effort to shun the limelight. But, but…

…but the scarily blonde, hamster-dooed Liberal Arts major waiting on me at my favorite 24-hour Choke & Puke forced me to go full-on POSTAL in a very public way last week.

I admit it. Just like that notorious traitor, Senator John McCain, I broke. Hand me the confession, Wang Chung. I give up. I'd sign anything to get the flaky bitch off my case.

I barely even remember how it started. I was sharing a coffee and croissant with a friend (who was equally unaware of how gay it might look) when spiky-haired college chickee showed up to ask us the ubiquitous, "How is everything?" question many servers take years to perfect. All I can say now is: "Thank God neither of us were in our POSTAL SHOOTING TEAM tee shirts!"

Yeah. That would have been bad. And considering two cops were sitting one level up from our main floor table, it could have been even worse.

My friend and I were discussing the relative merits of the Oliver Stone produced ABC miniseries Wild Palms from a few years ago-especially the part about how the Democrats and Republicans purposely nuked Boca Raton, Florida, to be able to suspend all constitutional rights under the faux threat of international terrorism. I think we were up to the point of lamenting that there's never a spare ounce of Plutonium or a mercury hot trigger when you need 'em most when she decided to offer her two-cents' worth.

She started in with something like, "I think it's awful the way people are talking about those poor old people in Florida…" adding, "…They can't help it. They're old."

I responded under my breath with, "Yeah, but I can."

I remember thinking of responding with; "No shit," but I kept what was left of my cool.

"Well, I don't think seniors and African Americans should be made to feel like they've been disenfranchised from the system just because—"

"Just because what?" I cut in. "Sorry, Deary, but I'm too high on the food chain to worry about people who couldn't find their ass using both hands and a hunting dog-especially when they're fucking with my future; with my freedom."

Hitting me with that condescending I'm a better person than you because I care look fostered by years spent inside politically correct reeducation centers known as public schools, she replies, "Well, I don't want to debate the whole election here—"

"Of course you don't. I don't blame you. It must be a terrifying thing to realize that there are some responsible human beings out there who don't weep and wail over those who refuse to accept responsibility for their actions or who are too damned used to the rest of us picking up their financial and intellectual checks to do anything but blame everyone else for their self-inflicted misfortune."

I think this was when my friend nudged me under the table to bring my attention to the fact the two cops were alert to my increasingly loud tirade. Oh, and yes… I really do speak this way in public when I'm pissed.

"Why do I have to bend over for these assholes' balloting myopia? Why do I have to reap the evil government they sowed? They seemed just fine at last Saturday's Bingo game when they were managing to keep track of eighteen cards at one time. Why do I have to give them another chance just because it would be the 'kinder, gentler' thing to do? Two words: FUCK 'EM!"

Sensing that she was about to burst into tears, I decided it would best to revert to film dialog to reassure the local gendarmes that I wasn't about to go for anything more permanent than an intellectual kill-shot, soooo… I clutched my side and did my best (i.e.: "worst") "Moses on a Budget" impersonation; dropping to my knees next to our table as I reached out a quivering hand to her, gargling a tuberculin, "People… Soylent Green is made of peeeeeeopllllle…"

The customers started laughing. The cops were laughing. She hurriedly walked away. I stood up.

"Yeah," I called after her, "Soylent Green is made of people. And you know what? It tastes just like chicken! Serve me some more, baby, and don't skimp on the Dentu-Creme this time!"

Our new server was a very nice young man. We tipped him most generously. Then again, this up-and-comer actually earned it. 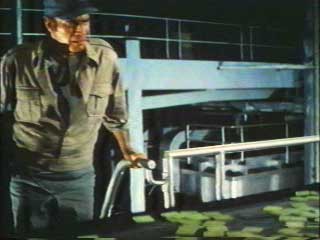